Jim2 makes extensive use of scripting technology. This provides Jim2 with unparalleled power to be tailored to specific company and/or industry requirements. Scripts can easily be imported, and instantly become seamlessly integrated into Jim2.

As a default, access to the scripting engine is not available. This is to protect from potential issues with the database. This is also governed by Jim2 Security.

All reports in Jim2 are linked to their relevant script. For example, the sequence of events that occurs when the Statement report is run within Jim2 is:

1.The Statement report is located within the Jim2 database and the linked Statement script is executed. 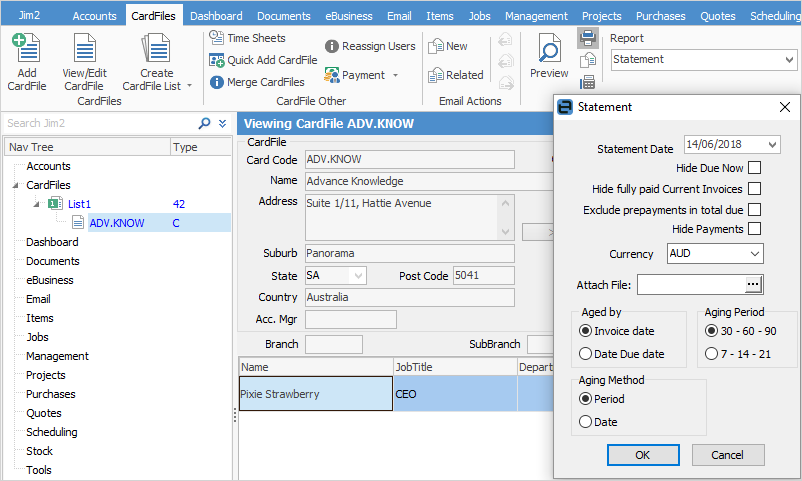 4.Control is returned to the script, which then generates and runs several SQL queries in order to provide data in a format appropriate for the reporting engine. The script also has access to the form or object within Jim2 that called the script. In this example, the script accessed the debtor's card code, selected print method, and the currently logged on user's details.

5.The script then creates and connects the report's data pipelines, initialises the report engine and fires off the report.

6.After the report has been viewed, printed, faxed or emailed control returns to the script, which then frees up any resources used, and returns control to Jim2.

The same script can be used in multiple reports. For example, the Invoice script is the same for all invoice layouts – only the actual report or appearance of the data is different.

Scripts aren't merely simple report glue. They can be as basic or complex as required. Examples include:

▪The stock profit reports within Jim2 are good examples of complex functions that are entirely scripted. These reports include a powerful selection criteria form (script form) and create several SQL queries in order to generate the relevant data and grouping. They even provide cost estimates for stock sold in advance.

▪Scripts also allow Jim2 to easily interact with other software, such as Microsoft Word, a spreadsheet, Access and Outlook. Jim2 fully supports XML recordsets, the core technology used in B2B and B2C applications, including Microsoft's Biztalk.

Script Editor at a Glance